1 week to the wedding. The chaos of preparation was at its peak. Daily Sangeet practices at home, pre-bridal, pre-wedding shoot, the works. I was watching my last week as a bachelorette pass by in a blur. Oh, but what a beautiful blurry image it made for. 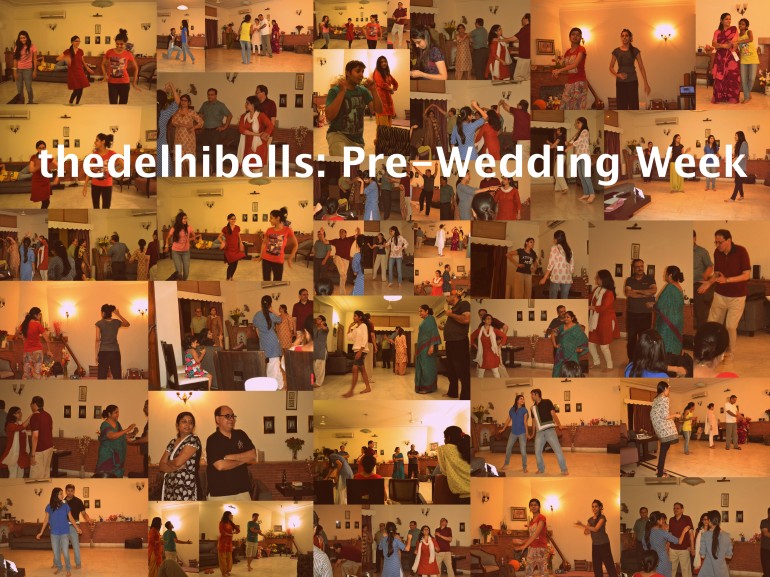 We’re a family of pro-dancers. Well, even those who don’t really know how to dance LOVE to dance! And our favourite function at any wedding is the Sangeet! Dance practices had been on for over a month. One of my cousin’s had actually asked me TWO months before the wedding, “shouldn’t we start dance practices now?” I had been collecting a song list since…well, March! A lot of people’s inputs had been taken into consideration so that at the beginning of Sangeet practice, there was a ready reckoner to refer to any time THE question came up “which song should we dance on?”

During the final week, we had practice sessions at home almost daily upto the day before the first function. I was worried the elder generation – our parents – would forget their steps by the time the Sangeet rolled in if we didn’t make them rehearse close enough to their performance day!

Friends and family flew in, and there were last minute additions to the final song list, and participants list! You know how there are always a few, well – many, who say they don’t want to dance a choreographed number on stage? Make them sit through just 1 dance rehearsal and they’ll be jumping, literally, at the idea! Suddenly, you’ll hear them saying “I’m dancing on JUST one song?” Eventually, I had convinced (forcefully or through tact) almost everyone I knew to be a part of Sangeet night. There was one last Sangeet practice at home 2 days before the actual Sangeet, and it felt like a mini-Sangeet itself, with all of my closest family members practicing their numbers one final time!

Another minor decision we made during this time was the caterer who would take care of everyone’s food needs at home during the wedding days. We had trial sessions with two of them, and we used our very own family members as guinea pigs! During the Sangeet practices, everyone needed to be fed. So we had food-tasting sessions right in the middle of our dancing sessions! And am I glad we did that?! The food served at home seemed to be appreciated by the wedding guests, so taking a family consensus on whose food tasted better helped!

Ah, the dreaded pre-bridal. I had been unsure for the longest time whether I should get anything done except the normal stuff (my normal does NOT include even a facial). I finally gave in, and got almost the full package at Affinity salon. The lady who did mine was someone I had been to many times over the last few months for waxing, and she’s also the one who did my first facial ever. So I went in for the usual bleach, wax, pedicure, Casmara facial and added a body polish to it. I did not take the manicure (I believe I don’t need one) nor the head massage as the cost was adding up quicker than you could say “HOW much?” But I was really happy with the end result. A little more confidence is definitely one of the bonuses, but most importantly – you get time to get out of the house, shut your mind off wedding planning and just get pampered. Oooh, the feeling!

Just one thing left before Wedding Week commences! Any guesses? I’ll give you a clue – it starts with “pre”!

You can read the whole thedelhibells series here: