Remember the review I did on MUA Shruti Sharma? I had gotten my hair and makeup done by her for my cousin’s Sangeet, which took place this September. My cousin – Rashi – was the bride, and she looked absolutely stunning on both the functions – her Sangeet & Wedding. She’s a natural beauty, and the hair and makeup just added a touch of glamour to it. I asked her to take some time out of her busy B-school schedule (yes, she got married in the middle of her MBA!) and write a review on her MUA – Supriti Batra. 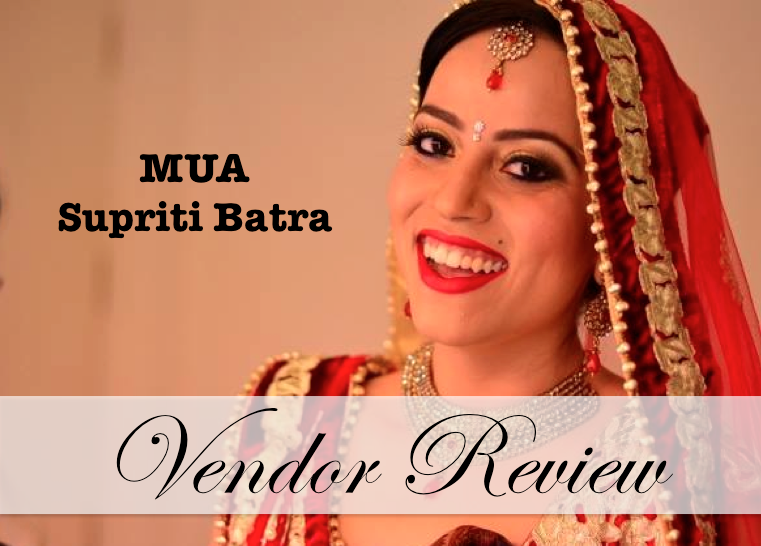 Supriti has a makeup studio in Gurgaon. She can be contacted at +91-9811006063 for any queries on her charges and availability. Here’s the review in Rashi’s words –

Why I Chose Them

Just 3 days before my wedding, I decided to change my makeup-artist. I know that it comes as a shock to most brides since it’s as good as changing your wedding trousseau just a few days before your wedding! Well, my entire wedding was planned out in less than a month’s time. It was to be held in Delhi but to add to the misery, I was nowhere close to Delhi! I was some 2500 odd kms down south in Kerala trying to get past my hectic term at B-school. The initial, obvious choice for an MUA was the person whom I had gotten my make-up done from for the past 4-5 years while I had lived in Delhi. True, I had only gotten light make-up done on previous occasions but I figured that she would do a good job on my D-day as well.

So why did I end up changing my MUA at the last minute? My mom really liked the work of one of her friends – Supriti Batra (who has worked with Satya Paul, Meera & Rohit and many other fashion houses and media shows) – and wanted me to try her out. So she casually told me over the phone one day that she’s has fixed someone for my Sangeet makeup, and the MUA will give me a trial for it when I land in Delhi. When Supriti arrived at my home, my mom asked her to give me a trial for my wedding make-up. I glared at my mom (I had only agreed for Sangeet makeup!) but she consoled me saying that if I like the wedding makeup, I will definitely like the Sangeet makeup. My mother also jokingly told Supriti that I am a tough client to deal with and am very finicky about clothes and makeup!

Supriti started off with the trial and told me that she will do half of my face to help me compare. The best part about the trial was that she made me feel extremely comfortable. I directly told her that even though I am the bride I don’t want to shine like a disco ball. And, I like heavy eye make-up. I ended up loving the trial makeup, and quickly realized she was far better than the previous MUA. And so, last minute change of makeup artist – done!

What I Wasn’t A Fan Of

Her make-up studio is in her house in Gurgaon where she has converted one of her rooms into an awesome well lit studio.

Would I Go Here Again?

Yes! Overall the experience and the outcome was great! Supriti was amazing. She herself is so sophisticated that you will have no doubt that she will make you look anything less than a fantabulously elegant bride! And I would definitely recommend her to any of the brides-to-be.

Personally, I loved my cousin’s hair and makeup. I thought Supriti did a stunning job, where she just added to her natural beauty. In person, she didn’t look too “made up”, and the bright lipstick was a nice bridal touch to the whole look. Rashi looked great, and from what I’ve heard – was extremely happy and satisfied with Supriti’s work. She’s definitely going on my list of recommended bridal makeup artists.

You can read other vendor reviews on the blog here.

Photography by The Wedding Company

Have you heard of Supriti Batra, or used her services? What did you think of it?

Find Me On Social Media